I’ve posted before about how fantastic the Microsoft Project & SharePoint Conferences are, well a couple of months ago Microsoft announced that they were merging those two conferences along with Exchange, Lync, Office 365 and pretty much everything in between into a new conference called Microsoft Ignite.

The Microsoft Ignite team have been hard at it planning what the event will be and it looks to be a cracker, but in a break from usual conferences, the team at Ignite want to hear from the community at large as to what content they want to see in the conference and have put up a survey at http://ignite2015.eventpoint.com/survey/callfortopics to understand the kind of content you want to see.

The team are also holding a series of TweetJams on twitter to engage with the wider audience. If your not sure what a TweetJam is, you can read more here.  But essentially, a TweetJam is a public discussion on twitter where posts are marked with a hashtag to allow the discussion to be tracked. Typically they have a host and a hashtag to follow. You can read more about TweetJam’s  here. 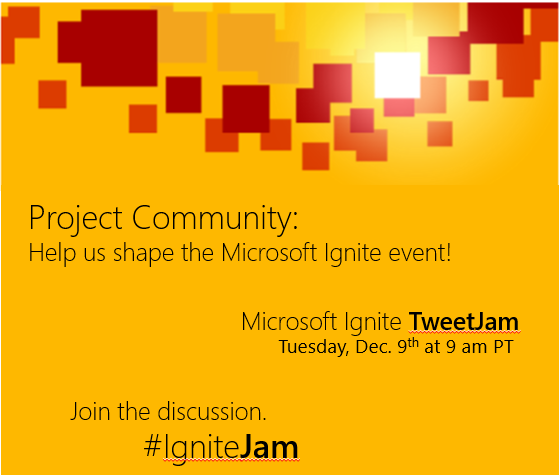 However I wanted to call out the Project specific TweetJam which is happening on the 9th December, the details of which are below:

The team would like feedback on the following during the TweetJam, so get thinking 🙂

Finally, if you haven’t already, registration for the Ignite conference is now open, I would recommend you taking a look at this landmark conference and move heaven and earth to get there.